Can cows eat pumpkins? Cattle farmers always look for a way to reduce the expenses of feed without compromising the health of beef cattle production. They face the maximum feed expenses in the winter seasons when there is low production of green foliage.

At the same time, the purchasing and feeding of the commodities of crops at the salvage value works great as a natural gift. In this way, these commodities work as a win/win situation for both parties.

Pumpkins that are left in fields are a commodity with a low optimal value. Additionally, the pumpkins transferred to markets for selling might get broken so they become less desirable for human consumption and grazing them on animals is the only profitable solution.

All the queries related to feeding pumpkins to cows, like “Can I feed my cows pumpkins? Can cows have pumpkins?” are well answered in a quite informative way in this article.

Contents show
1 What are Pumpkins?
2 Do Cows Eat Pumpkins?
3 What Animals Can Eat Pumpkin?
4 How to Feed Pumpkins to Cows?
5 Benefits of Feeding Pumpkins to Cows
5.1 1. Alternate feed for cows
5.2 2. Feeding pumpkins to dairy cows
5.3 3. Pumpkin seeds as dewormer
5.4 4. Improves the digestion and consumption
5.5 5. Works as a miracle food for pregnant cows
6 Nutritious Value of Pumpkins
7 Cow Pumpkin Seeds
8 Is Feeding Pumpkins to Cattle Enough Diet?
9 How to Feed Pumpkins to Other Livestock?
10 FAQs
10.1 Are pumpkins poisonous to cows?
10.2 What animals like to eat pumpkins?
10.3 What vegetables can cows eat?
11 Source:

Pumpkins are the beautiful orange coloured orbs of the autumn. Its delicious taste and soft flesh make it an alternative feed of livestock. The high moisture contents and protein contents in this food makes it a really good option to add in a diet plan.

It does help in enhancing the animal’s health, by promoting the better consumption of the pumpkins and corn stalks from the adjacent fields.

Yes, cows love to eat pumpkins. Cows find them palatable and do not find any trouble in consuming them properly. If the pumpkins are a little firm then cut them into pieces, to facilitate consumption.

What Animals Can Eat Pumpkin?

It is safe to feed pumpkins to many animals, from pests to livestock. The only care to be taken is that if they aren’t rotting, painted or some other improper thing done on it.

Pumpkins can be added in the feed of these animals:

How to Feed Pumpkins to Cows?

Feeding the pumpkins to cattle is simple, easy and a great addition to their diets. There are many ways to feed pumpkins to cows as:

The only care to be taken while going to feed pumpkins to cattle is to give them a habitual time, by adding little amounts of pumpkins in their diet and increasing them gradually.

Benefits of Feeding Pumpkins to Cows

There are a lot of benefits of feeding cows pumpkins as:

Pumpkins are a good source of food in the low foliage, low-quality grass season. During the autumn or after the fall season, the quality of the grass is not very impressive for cows, so adding the commodities of crops, like leftover pumpkins to the feed works great.

As the water content increases in the body, it positively impacts milk production in milking cows.

Researches show that the presence of a chemical named “cucurbitacin” in the pumpkins has the action as a natural dewormer in livestock.

Impacts of feeding pumpkin seed for cows results in the form of improved digestion and body health of cattle.

4. Improves the digestion and consumption

Addition of pumpkins in the diet plan of livestock improves the digestion and consumption in the stomach. Fibres present in the pumpkin food improves the consumption-ability of stomach linings.

It also works as an anti cancer agent in many animals.

5. Works as a miracle food for pregnant cows

Pumpkins are a good energy source and rich in protein contents. The crude protein present in the pumpkins is estimated to be 14-17% on a dry basis with the 60-70% in-vitro digestibility.

So much energy from the protein contents is a great supplemental food for dry pregnant cows during the fall, dry season. It can be included as supplement food in the existing diet plan for improving calves health.

Pumpkins are a highly nutritious food supplement. They are low in carbohydrates but have an impressive value of protein that is a good energy source for cattle as well as other animals.

Pumpkins are consists of:

All the other nutritional contents of pumpkins are described in the table below. 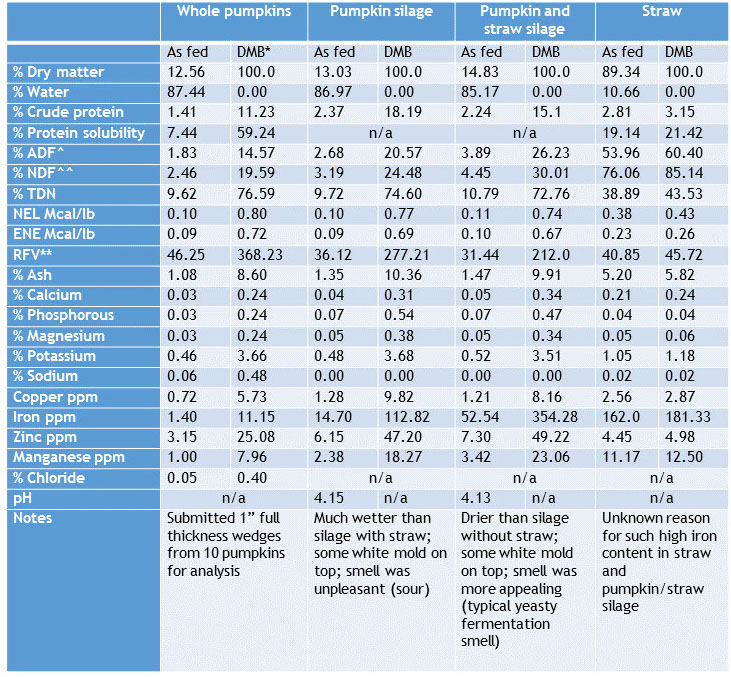 **RVF = Relative feed value – that helps in comparing the energy value of different forages. It reflects digestibility and potential intake. The standard of 100 is mature alfalfa in full bloom.

Pumpkin seeds are not toxic to animals and humans but the interesting thing about the pumpkin seeds is that they contain a compound called cucurbitacin that has many beneficial impacts on the cow’s health.

The high amounts of this chemical compound make the food a little bitter in taste.

Generally, pumpkins are never considered as the sole feed source due to their high moisture contents and it reflects that it has low dry matter.

However, cows need a lot of dry matter, so only feeding the pumpkins is not enough for cattle.

But the pumpkins are commonly used as a feed source in conjunction with cornstalk residues or grass pasture to ensure enough feed availability to cattle. Cows love carrots, watermelon, and other similar diets as a treat.

How to Feed Pumpkins to Other Livestock?

Ways of feeding pumpkins to all animals varies as per their food requirement and size of the animal. Animals with short stature and young ones are supplied with cut pieces of pumpkins while the large animals are left open in a patch of pumpkins.

Many people asked questions like, can goats eat pumpkin? And the same question for sheep and horses. So, feeding ways of some common animals are discussed here:

Are pumpkins poisonous to cows?

No, pumpkins are not poisonous to cows, however, they are much beneficial for cows, as they improve the health of cows.

Feeding pumpkins seeds to cows help in better digestion of feed and pumpkin seeds acts as a natural dewormer.

Many animals love to eat pumpkins such as Horses, Cattle, Alpacas, Sheep and Goats. Many other animals like Deer, Rabbits, Squirrels and Chipmunks too eat pumpkins.

What vegetables can cows eat?

Cows eat many vegetables. It can be added in their diet plan or feed solely. Cows eat carrots, spinach, watermelon, cucumber and pumpkins and many more.