It is a comprehensive guide on cattle feeds. All aspects of cattle feed, their role, benefits, and nature of feeds well for cattle are well discussed in the article.

The great thing about this guide?

In short, you will notice an improvement in the physical health of cows as well as meeting the nutrients needed with this cheap food source.

Let’s move to the article from watermelon’s nutrition to its role in cow feed.

Can You Feed Watermelon to Cows?

YES, Cows can eat Watermelon, In many pieces of research at the scientific level and by local cattle farmers put their positive thoughts in feeding watermelons to cows due to their high nutritious value.

Watermelon is a round-shaped, tasty vegetable that is loved by cows for its sweet taste and it is nutritious football that shows incredible impacts on cows’ bodies and production.

Why Feeding Watermelons to Cows?

Watermelons are a rich source of energy, protein, and vitamins. There is a bulk of nutrients in watermelons that positively impacts the physiological development of cows.

The presence of trace minerals in watermelons inspires the farmers to feed the melons to cows to improve milk production.

A Lot of minerals that are necessary for an optimum cow growth system are present in watermelons and it is a cheap source of those nutrients.

So, in order to acquire the nutrients, maintenance of health and productivity and the main benefit that “cows can eat watermelons”, pushes the farmers to add the watermelons in their feeds.

Feed in Moderation to Cows

It is a known fact that watermelons are rich sources of nutrients and many trace minerals, but the nutrient composition of watermelons is not good enough for completely satisfying the nutritional requirements of cows.

The addition of watermelons in the existing diet plan – to get the full benefit of both from each source, is a quite perfect strategy.

Watermelons should be no more than 20% of the over diet of cows along with hay or grains feed.

Sometimes, farmers exceed the limits of watermelons and it negatively impacts the animal health and does not eat hay feed as its belly is already full with watery melons and ultimately, it results in a form of low productivity.

Impacts of Feeding Watermelons to Cows

When cows eat watermelons, you think that it does help in meeting the hydration requirement of the cow’s body. However, the nutrition of outer hard covering shell and inner soft fleshy material shows quite positive impacts on:

Feeds with high crude fiber composition are considered to be best for cattle. Similarly, watermelons are rich in crude fiber and it makes them a valuable addition to the cattle feed.

The starch and sugar present in watermelons provide energy to cows during their development days. But keep noticing to protect the overfeeding of high sugar contents to cows as watermelons are high sugar food and it could lead towards damage to the health of cows.

During various stages of production, a well-sufficient and balanced diet is needed for lactating cows. After the birth of offspring, cows produce half of their milk in the first 100 days of lactation.

In these 100 days of lactation, by providing nutritious feed you can get maximum milk production.

Here comes the role of watermelons, eating watermelons not only increases milk production as well improves the quality of milk by higher mineral contents.

Carbohydrates, proteins, and vitamins in watermelons help in the build-up of health as well as a positive impact on milk production.

The core of animal husbandry is the health of livestock. This statement has a great impact on the farming industry as health and productivity have a direct correlation. Cows with poor health issues are not very productive.

Watermelons play a role in improving and maintaining health issues by providing vitamins that boost up the immune system for enabling the system for an effective fight against diseases.

Watermelons are also used as antioxidants that have preventive effects on cows’ health as well as improving metabolism that ultimately increases milk and meat production.

By working as antioxidants, feeding the watermelons protects the animals from damages of oxidation like poor meat quality. Meat affected by oxidation has poor texture, taste, color and nutritional value.

Cows can eat watermelons to keep their body hydrated all time, especially in warm seasons in arid areas. It keeps the animals fresh for prolonged times.

The well-hydrated body has many positive impacts on the body as increased milk production, the functioning of the body, and digestion of feed.

Cows affected with an uneven water supply can never produce milk at its full potential so watermelons are recommended as a source of water.

How the Crude Protein in Watermelons is Good for Cows?

Crude protein is composed of:

Therefore, cows fed with watermelons have a greater difference than their counterparts. An increase in cow weight is the major factor distinguishing them from other cows.

That influence on the weight of cows directly imparts the profitability value of cows.

The importance of crude protein can be truly seen by knowing the effects of the crude protein deficiency symptoms on cows bodies as:

How Watermelons are a Miracle Food for Lactating Cows?

Watermelons have a great positive influence on lactating cow bodies. The main benefit of feeding watermelons to cows comes in the form of improved body weight.

The lactating cow loses much of its body weight at the beginning of lactation by the withdrawal of body reserves. It was observed in a research study that almost 66 kg of cow’s body mass was lost during the first three months of lactation.

So, feeding with high nutritious watermelons would help a lot in maintaining health and body weight.

Care While Feeding Watermelons to Cows

Here are a few tips to follow for securing the cows from the negative impacts of feeding watermelons to cows. They are as:

If you fail to adhere to any of these tips, it will result in poor productivity and a negative impact on the health of cows. 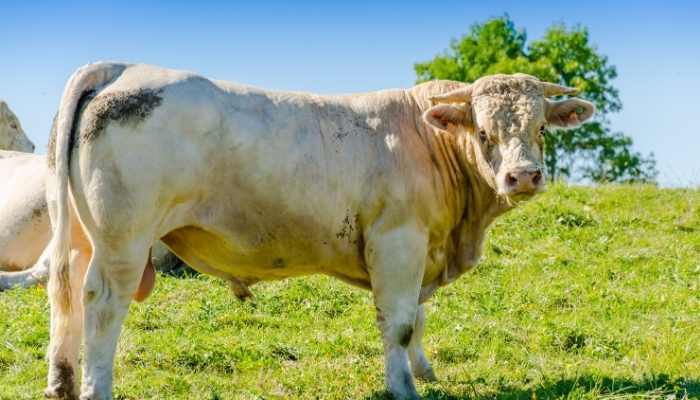