As it is an interesting fact that ostriches are flightless birds, so, do ostriches have wings? They are fast runners and it is quite a struggle for many animals to outrun them. They are better known for their powerful legs instead of their large wings.

The presence of wings on birds that are often seen on land rather than air seems quite contradictory.

What’s the use of wings when they can not fly? Well, to answer all these questions, you first have to know whether they have wings or not.

Contents show
1 Does an Ostrich Have Wings?
2 Why Do Ostriches Have Wings?
3 Characteristics of Ostrich Wings
4 Purpose of Ostrich’s Wings
4.1 Courtship Display
4.2 Changing Direction While Running
4.3 Providing Shades
4.4 To Assert Dominance
5 Conclusion

Does an Ostrich Have Wings?

After all, ostriches are birds, so, they do possess a pair of wings. It does not seem to make sense as ostriches are flightless birds, so, why would they need this physical feature or attribute? Their wings are mostly for show and can not do the heavy lifting when it comes to flying.

Ostriches, being the heaviest and the largest bird, can not fly because their wings are not designed to carry the bird’s weight.

Their wings are shaggy with not much strength to lift the bird in the air. Though these wings are no longer used to fly, many flightless birds have found new uses for their wings.

Ostriches use their wings for courtship display, maintaining balance while running, and to protect young ones from the scorching heat.

Why Do Ostriches Have Wings?

Wings on ostriches hang around even though they have lost their original function.

Wings on flightless birds are known as vestigial structures meaning physical features that had a necessary function at one time for the bird’s ancestors but not as important for the modern species.

These physical features are not fully functionless but they are simply used for a different task, relatively minor functions.

The ancestors of ostriches were flying birds, using their wings to take flight. Wings on ostriches are the result of biological inheritance.

As the bird evolved over time, they lost their ability to fly. Ostriches gained weight, became heavier, lost their flying capability, and adapted themselves to the land.

Though they are no longer useful, it is not possible to remove such an important structural feature from genetics, therefore, they exist as vestigial structures.

Modern ostrich species use wings for less complex functions. Ostrich wings are an example, they are anatomically complex and should help the bird fly.

Since they have lost their original function, they are used for less complex roles.

Ostriches can not fly in spite of having wings because birds from the ratites category lack keel found in the breast bone which assists in holding muscles needed for flying.

Since their wings are no longer adapted to flying, they are not as sleek or tightly packed as other birds. Ostriches have shaggy wings with loose and soft feathers that seem to stick out in clumps.

Unlike the feathers of other birds, their wings are not waterproof and can get soaked in rain.

The color of male ostriches is black and white whereas females and baby ostriches have grayish-brown feathers.

Related What Do Ostriches Eat?

The wings on the largest living bird are considered evolutionary leftovers that lingered around even after the bird adapted to life on the land.

Wings were retained for display and temperature control purposes. Though they can not fly, ostriches use their wings for minor yet important functions. Ostriches employ their wings for the following purposes

The wings of the largest flying Ostrich and the ostrich-like bird can be the best “wingman”. They use them to attract mates in displays of courtship during the mating season.

The black and white male ostrich attracts a light brown colored female by sinking slowly to the ground in a sort of bow and then waving and shaking the wing feathers alternatively.

After the courtship ritual, a male ostrich approaches the females holding his wings out.

Ostriches have shorter wing bones as compared to their body size.

Learn Riding Ostriches is Possible or Not

The bird uses the long, fluffy wing feathers as rudders helping it change direction when running at a high speed. They spread out their wings while running to maintain balance.

As the temperature gets soaring high, ostriches use their wings as a shade to protect young ones from the heat.

Ostriches assert dominance by lifting wings holding their head high, and their neck upright. It is their unique way of expressing power.

Ostrich evolved around 60-65 million years ago, their ancestors were flying birds, however, the same can not be said for the modern species.

They are flightless but they have inherited wings from their ancestors. Since they are adapted to life on the ground, the bird uses its wings to perform some other functions. As they can not fly, they have evolved to be fast runners with a speed of approximately 60 mph. 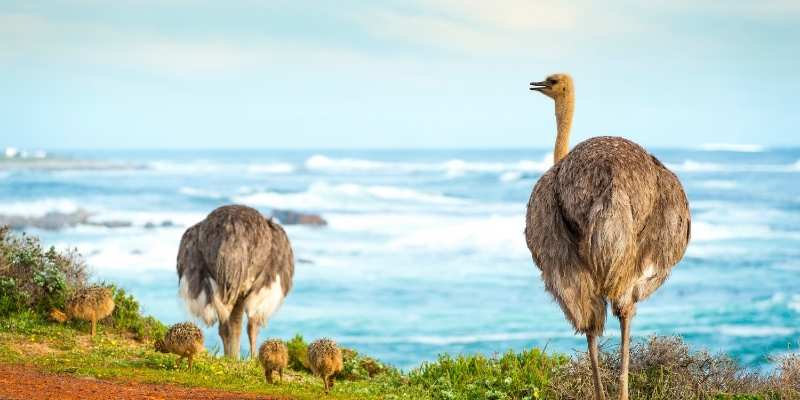 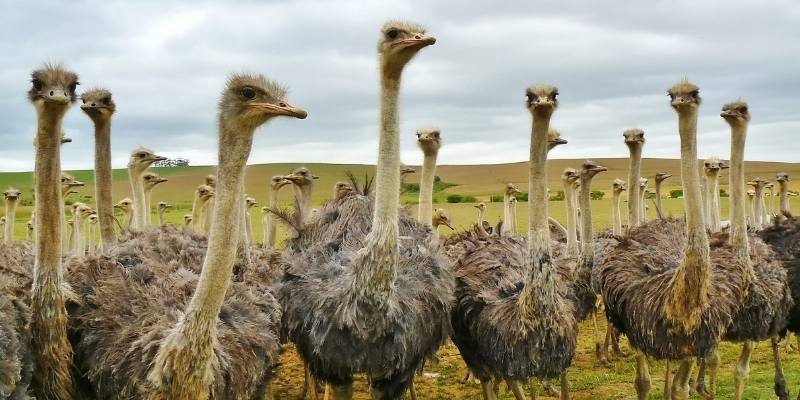 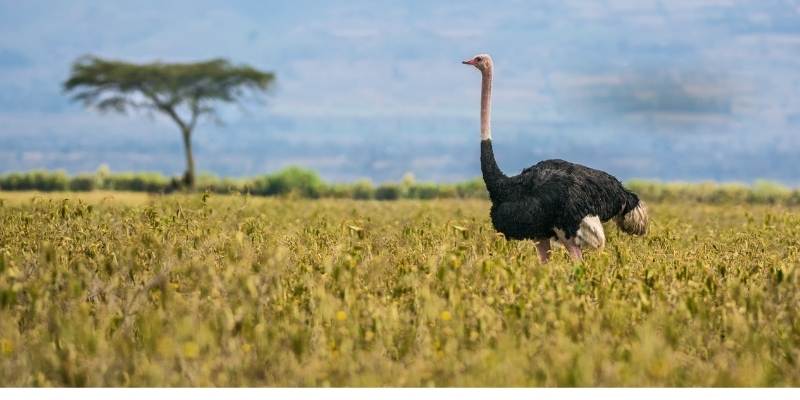 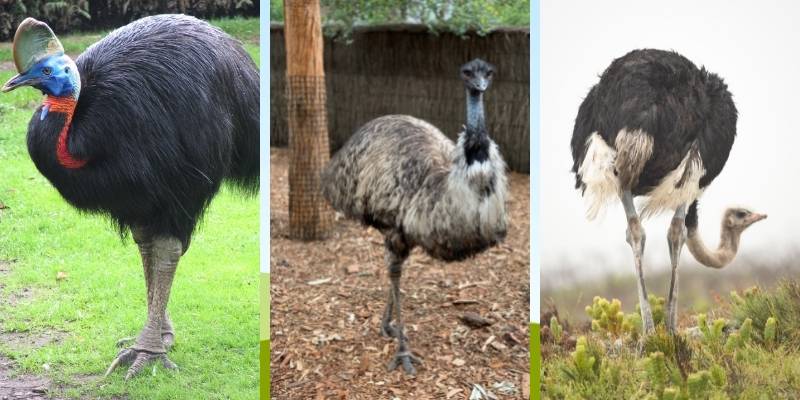 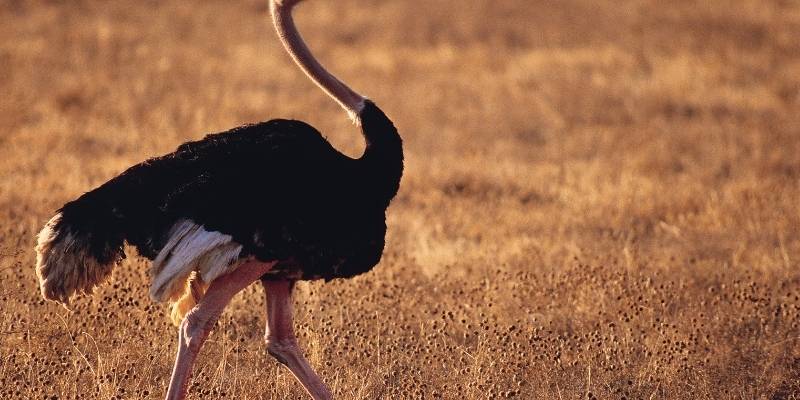 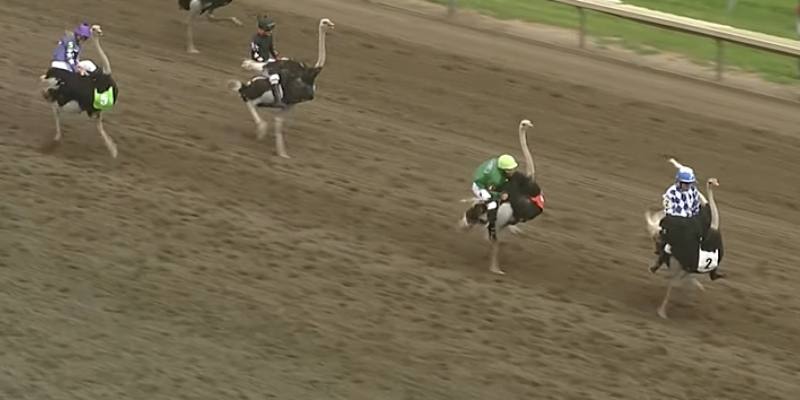